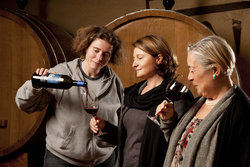 Donatella Cinelli Colombini is a legendary pioneer in the world of wine. With a long history in Tuscany - her great-grandfather, Giovanni Colombini was one of the founders of the Consorzio del Brunello - Donatella has worked tirelessly not only to craft incredible wine but also to champion the role of women working in the wine industry.

Donatella Cinelli Colombini owns two wineries, one in Montalcino and one in Trequanda in the Chianti and DOC Orcia regions. Fattoria del Colle is located between the Chianti and DOC Orcia. Of its 336 hectares, 17 are vineyards and 6 olive groves. Among the varieties grown here is the old forgotten and abandoned 'Foglia Tonda' that has now been rediscovered and appreciated after more than a century by Donatella Cinelli Colombini.

The other vineyards grow grapes that produce a Chianti Superiore DOCG, Cenerentola and Leone Rosso - both DOC Orcia; Il Drago and Le Otto Colombe Tuscan IGT; Vinsanto DOC Chianti, a dessert wine of Traminer grapes, as well as extra virgin olive oil DOP Terre di Siena in monocultivars of Corregiolo (Frantoio) and Moraiolo.  In the vineyard, Donatella Cinelli Colombini has been cultivating her grapes using sustainable and organic practices for many years and received official organic certification in 2018.

The Fattoria del Colle's picturesque winery is in the XVI's century villa cellars by a medieval hermitage currently used to store the older bottles of DCC's Brunello di Montalcino. A walk past stone walls, arches and French oak barrels takes one to the stairs that lead to the Vin Santo attics.

The 'Tinaia', with its view over a breath-taking vista of the Crete Senesi, is equipped with stainless steel temperature-controlled vats. It has recently been provided with photovoltaic panels for the production of electricity.