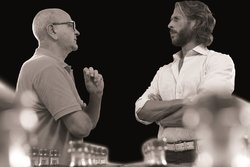 Grappa and Brandy are the most traditional of Italian spirits and represent a time-honoured custom of sharing time together after a meal with a digestif in hand.

Grappa is obtained by distilling the "pomace" (or "leftovers") from the winemaking process, while Brandy is created by distilling wine. In its original version Grappa used to be clear and very strong, but in the last few years Italian distillers have moved to a more elegant and complex concept of the spirit through extended maturation in oak.

In 2010 Marcello Bruschetti (owner of Enoglam) and Luciano Brotto (distiller) met and together they decided to take one step further in order to let the concept of Grappa evolve even further in terms of elegance and complexity. They wanted Grappa to sit at the same table as the most exclusive and famous brown spirits produced all over the world.

The "Enoglam" project (which includes two brands: EVO and OdeV) experimented with the use of native woods - such as Cherry, Chestnut, Beech - for longer maturation periods before bottling, and also with unusual procedures like the smoking of the pomace before distillation. The intent was to develop a spirit with a unique, strong, international personality.

Today we still define these spirits as "Grappa" and "Brandy", but such definitions are far from describing their roundness, complexity, and elegance. We should probably start calling these spirits simply "EVO", making it a synonym of Italian Style in the spirits' world.

"My meeting with Luciano Brotto changed my life. It was June 2010 during "Vini nel Mondo" in marvellous Spoleto and Luciano absolutely wanted me to try his latest experiment. Early on, I fell in love with the idea and decided I just had to make it my own. That experiment fostered the dream that I am now ambitiously trying to turn into a project with the support of Luciano. Using Italian tradition as the springboard to develop new products with a unique, strong, international, personality as well as timeless elegance and pleasantness. By experimenting with the use of native woods for aging, the careful use of smoked pomace and playing with the incorporation of woods used in aging different distillates, the result is a limited line of products that are each very different from one another and like nothing else on the market."