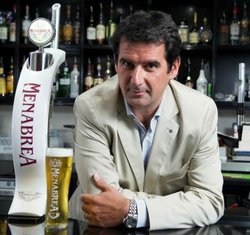 The Menabrea brewery was founded in 1846 by Jean Joseph Menabrea of Gressoney. Jean Joseph built his brewery in Biella at the foothills of the Alps, where the water is clear and cool and the air is crisp and clean. After surviving two World Wars and being passed from father to son for several generations, the business is still managed today by descendants of the Menabrea family.

Devoted to quality, Menabrea is an artisanal Italian brewery roughly producing in a year the same amount the large breweries produce in only a few days. The beer-making process at Menabrea remains very traditional and all beers age a minimum of four weeks before bottling. Menabrea's ancient cellars are hewn out of rock 100 feet beneath the brewery, creating ideal conditions for the gentle and cool aging that contributes to great beer. As Italy's oldest brewery, Menabrea is world-renowned for beer of the highest quality and tradition. One of Menabrea's trademarks ingredients is pure water from the Alps that, because of its ideal position, flows naturally to the brewery. Menabrea is made with the highest quality barley and hops and their slow-brewing process is a large part of the reason they are a three time winner of the Gold medal at the World Beer Championships for the best pale lager.

A national importer of fine wine, spirits, and beer with distribution in New York, New Jersey, Washington D.C., and Virginia.